DJI has set the standard in drone technology and the DJI Phantom 4 Pro is no different. If you have read any of my other reviews you know how much I admire DJI’s innovative and technologically advanced drones.

In this review of the Phantom 4 Pro, you will see exactly how they are raising the standards and why their competitors cannot keep up

As the leading manufacturer of high-end consumer drones especially those used primarily for aerial photography, DJI is setting industry standards that competitors can only imitate.

DJI has managed to master integrating these advanced technologies into their drones which has made them the industry leaders in consumer drone manufacturing.

The DJI Phantom 4 Pro is the successor to the hugely popular Phantom 4 and although it is an old drone, it is still supported by DJI, which is not the case with the older phantom drones.

As many people will purchase a drone like the Phantom 4 Pro for commercial purposes, it is important that you are familiar with the rules and regulations for commercial drone operations in your country.

In the USA, you will need to obtain the Part 107 certificate, this is a 2-hour exam and you will be required to obtain a score of at least 70% to pass. This is a particularly tough exam, especially if you have no background in aviation, fortunately, there are a lot of prep courses and study guides that will help improve your chances of passing the first time.

In the UK, you will need to obtain a Flyer ID & Operator ID, the Flyer ID will require you to sit an online exam and it lasts for 5 years and is free to take.

The Phantom 4 Pro follows a similar design as that of its predecessor and most phantom drones, it’s a large drone with its distinctive curved body and pair of landing legs.

The aerodynamic body has also improved the flying time of the drone, with the Phantom 4 pro now averaging a very respectable 30 minutes on a fully charged battery.

It has powerful brushless motors that help you with flight stabilization and acceleration, there are LED lights underneath each arm that will indicate the flight status and also flash in certain ways to help with troubleshooting any issues that may arise.

Once again, however, the real improvements have been made under the hood. DJI has incorporated an additional internal measurement unit, sonar sensors, and a downward-facing camera to ensure that the flight and hover stability of this quadcopter is much better than its predecessor.

Given that Phantom 4 had already made its name for the quality and stability of its flight ability, this indeed is a stunning improvement.

The drone can connect with up to 24 satellites utilizing both GPS and GLONASS for much better hovering capability and flight positional accuracy. The combination of these satellite connections and internal programming means it will be aware of its point of take-off and can return home safely.

Other cool features which are great for beginners are automatic take-off and landing. You can set the limits to the speed and distance traveled if you are a beginner and do not want to lose line of sight. With the smart return home mode, losing this drone is near impossible.

DJI is not leaving any stones unturned to get ahead in this industry and the safety of their customers and the drone itself is one place they have put in considerable resources to improve.

They had already implemented safety features in many of their other drones but with the Pro 4, they have made it nearly crash-proof.

I think I mentioned in some other article that the more expensive a drone is, the easier it is to fly. Well, this drone could be flown by a kid and still wouldn’t crash and the camera footage would still be excellent.

What makes this drone truly remarkable is its obstacle avoidance system, yes other DJI drones have a similar safety feature but the Phantom 4 pro has taken it to another level.

Why? Because it now boasts not just a front-end sensor, but a rear sensor, one on the bottom and two infrared sensors on each side. In total that is 5 obstacle sensors, 4 of which are programmed to avoid obstacles.

Along with the sensors underneath the drone and the powerful processors with the drone, the enhanced obstacle avoidance system can create a virtual 3D world within itself. This gives it a good idea of all the obstacles around it, to give you a system that is nearly crash-proof.

There is really one mode you can crash this drone in and that is sports mode, the only mode in the obstacle avoidance system is not active.

In the intelligent flight modes like TapFly and ActiveTrack, it will sense the obstacle and find another way around it or it will just hover until other instructions are provided.

The downward-facing positioning system has dual cameras and 2 ultrasonic sensors for greater positioning accuracy. This is especially useful for indoor flying as the system allows for a more stable GPS-like flight while indoors.

For extra security, the Phantom 4 Pro has built-in redundancies, it has 2 compass systems and 2 IMUs, if either one displays incorrect data, the drone will discard it without affecting flight time.

With these safety features, the Phantom 4 Pro is suitable for drone enthusiasts of all flying levels. Confidence is key to flying safely and with these technologies being incorporated into the drone, beginner pilots will feel more confident flying a high-end drone.

All the intelligent flight modes from the Phantom 4 have been imported to the Pro version with added features also the return home function has had an upgrade.

The controller has a toggle that has three positions, each indicating a flight mode. If you are familiar with previous phantom models, you’ll know what they are.

Positioning mode – The easiest mode and the one all the intelligent flight modes can be flown in. The obstacle avoidance system works only in this mode

Sports mode – This is for advanced pilots, the sensitivity of the controls is enhanced and the obstacle avoidance system is turned off. Only fly in this mode if you are experienced and confident. The drone also reaches its top speed in this mode which is around 45mph

Altitude mode –  When there is no GPS signal and no vision positioning system the drone will hover at an altitude by using its barometer.

The drone comes with all the intelligent flight modes found in the Phantom 4. TapFly lets you tap anywhere on your app screen and the drone will fly to that position. There are three modes in TapFly, forward mode, backward mode, and free mode.

These are all self-explanatory apart from the TapFly free mode. TapFly free mode lets you set the direction of the drone and control the gimbal, however, the obstacle avoidance in this mode is turned off.

A new intelligent mode similar to TapFly is the draw mode, you draw a path on the screen and the drone will move along the same path. This lets you free to concentrate on the camera and take great photos and videos.

There are three modes in ActiveTrack:

Trace –  The drone will follow the subject from behind or track in front.

Spotlight –You can fly the drone in any direction, however,  the camera will be focused solely on the chosen subject.

Profile – Fly alongside a subject at certain angle and distance. Good for following fast-moving objects.

Another new mode is the gesture mode, using advanced technology, people can gesture in certain ways towards the drone and it will take a picture (called a selfie in this age).

There is also a sports mode, which unleashes the full potential of the drone’s motors. This mode lets advanced users reach speeds of up to 50 Mph, although the drawback is that the obstacle avoidance technology is switched off, so the drone is in full control.

This means more caution will be needed when flying at high speeds so make sure you are aware of your surroundings. Also, this mode eats up the battery time much faster and you can expect a flight time of around 20 minutes or less.

This is where the Phantom 4 Pro really stands out from its competition and its predecessor as if all the other features weren’t enough, DJI went ahead and improved its camera that will have even professional photographers drooling.

This stunning camera uses an all-new 1-inch image sensor which is nearly 4 times bigger than the sensor on the Phantom 4. This will make your photographs and video far more crisp and detailed. The camera can capture RAW and JPG images at an astonishing 20 megapixels and record 4k videos at 60 fps.

The ISO range for still images is 100-12800 and for videos, it’s 100-6400, so recording or taking photos in bad light or with fast-moving objects should not be an issue

The camera also comes with a mechanical shutter to eliminate the jello effect that comes from shooting fast-moving objects. It also has aperture control from f/2.8 to f/11 giving you more options for shooting better images in low-light environments.

For videography, DJI has really upped their game. It can record true 4k at 60 fps using a bitrate of 100mbps for high-quality slow-motion footage.

You have a wide choice of recording options and if the 4k files are too much, you can downgrade to the equally impressive 2.7k format. You can record all these settings in h.264 and h.265  codecs.

I have not mentioned all the frame rates and video resolutions you can record at because it is vast but the quality is as close as you will get to Hollywood class.

The 3 axial gimbals provide exceptional stability when it comes to recording footage even with the sports mode on, which is impressive. The gimbal uses the latest in stabilization technology and along with its own custom dampers, it gives you distortion-free smooth images.

To see the stunning videography of this drone, watch the video below, simply stunning. 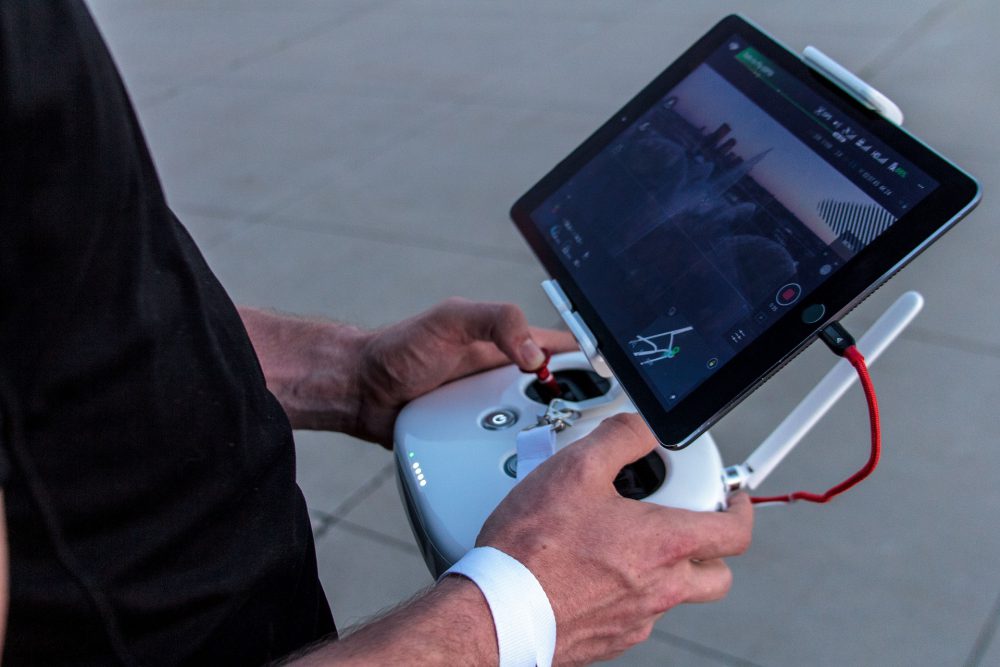 The controller fits in with the whole elegant design and all-white finish of the drone. It fits perfectly into your hands and all the controls are within easy reach.

There are buttons to take still images and start and stop video recording. It has two dials on the top, one for gimbal pitch and the other to control camera settings.

With its Lightbridge technology, you can beam live HD footage straight to your tablet or phone. The live stream is has reduced latency thanks to the advanced transmission technology.

For superior aerial photography, drone companies must master two distinct but related technologies in terms of flight stability and imaging capability. DJI, with its Phantom 4 pro, has managed to merge these two technologies to near perfection giving it an unfair advantage in the booming industry of aerial photography.

Is The Phantom 4 Pro Worth It?

My only issue with the drone is its size, I am a huge fan of the Mavic drones because of their foldable structure and lightweight design, if it was between any Mavic drone or the Phantom 4 Pro, I would go for the Mavic drone.

With the release of the Phantom 4 Pro, DJI once again has raised the bar for aerial photography. With its 4k camera and stabilized gimbal, you can pretty much take professional-grade photos and its 5-way obstacle avoidance technology will make for safer flying.

Thanks to its advanced flight technology and autonomous flight modes even beginners will find operating this drone very easy. With its range of features, the drone can be used for photography, videography, and even photogrammetry, although, DJI has specialized drones for enterprise use like the Phantom 4 RTK.